Back to Top
All posts

In his role for the Google Cloud marketing team, Mahiri Wise is tasked with nurturing developer communities. As part of the Google Cloud Innovators program, he recently kicked off an AMA (i.e. Ask Me Anything) — an online event series to build community and learning around Google Cloud. In the year-long series, developers meet with Google Developer Advocates and Executives to ask them questions in a relaxed, informal setting. There's also opportunities for mingling and socializing.

"There's a lot of online fatigue," Mahiri says. He adds that Kumospace offers activities that increase people's focus and improve their digital experience.

Kumospace stands out from other video chat platforms because it's set in a vivid, realistic setting that mimics the real world. With Kumospace's core feature - spatial audio, the closer you are to other guests, the louder you can hear them. Using the proximity chat in Kumospace, Google Cloud Innovators event attendees can freely move between groups, joining one conversation and later moving on to another. 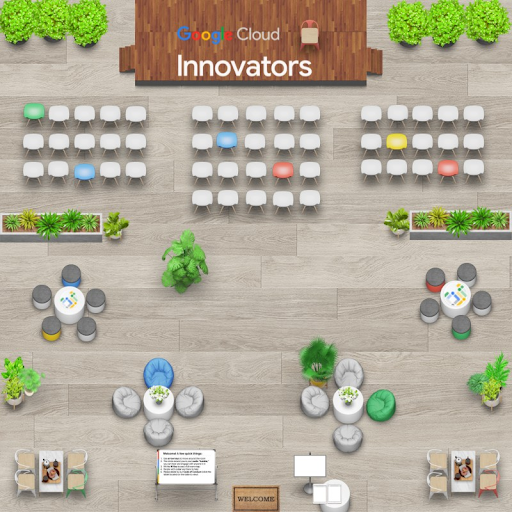 "We invite members to bring their questions, or join and observe. Some of them come in and roam the floor while listening to the host. Others gather around the presenter," Mahiri says. He notes that the flexibility in the platform makes the setting feel more relaxed.

Mahiri initially found Kumospace because it was selected as a socializing and community building platform for the 2021 Google Cloud Next conference, which he explains "covers all things Google Cloud." Kumospace hosted more than a thousand guests for the conference.

Approximately 30-300 developers from all over the world gather at the Google Cloud Innovator community's AMA events. The events are designed to be intimate and informal. "We want them to feel like a community event, and not like a conference," he says.

Customizing the Space with Logos, YouTube TVs, and Interactive Whiteboards

Another standout Kumospace feature is the ability to customize your space's floors. Hosts can customize their virtual spaces by choosing from a range of furniture and decor options, including practical interactive apps like Kumospace's YouTube TV, where you can share an informational video about the product, or the Custom Links Tablet, that lets hosts link out to your website or to a Google Doc. Plus, there's options like adding your own logos or colorful virtual furniture. Mahiri worked with the Kumospace Design Team to customize the Google Innovators event space.

"The Kumospace team created the signs, as well as furniture, to fit Google brand colors and Google style," he says. The Google Innovators floors are furnished with stages for presentators complete with comfy bean bags, and other stylish seating options, in colors that match the Google brand. There's also personalized signs throughout the floors that showcase the Google logo.

He also used Kumospace's existing templates (i.e. pre-designed floors) such as the Park, which Mahiri's team relabeled the Green Room. It's a space exclusively for presentators to kick-back and relax or prepare for their AMA event.

Mahiri says he particularly likes the interactive Whiteboard for brainstorming ideas and the chat function. "I like that the chat can be to the entire floor, or directly to a person, which gives folks the opportunity to engage one-on-one, and not necessarily with only a host," he says. "It makes it a lot more like a live event."

"Kumospace does drive costs down," Mahiri says. He explains that Kumospace saves him on the lead time to launch an event. "I can just sign into Kumospace, make sure the floor is set up, and then move on to advertising an event versus spending a month-plus designing an event or creating something from scratch."

Mahiri also returns to using Kumospace month after month because of its accessibility. He considers it a tool worth sharing.

"The ease of setup is definitely a primary reason I would recommend Kumospace to others — and I really appreciate the customer service team's swift responsiveness and creative problem solving," he says. "It's totally worth it."

We've got a space for that.